World Ocean Day: Ocean Life and Livelihoods in the Tropics

The Ocean covers over 70% of the planet and 76% of the Tropics is Ocean. It is our life source, supporting humanity’s sustenance and that of every other organism on Earth.

The Ocean produces at least 50% of the planet’s oxygen, is home to most of Earth’s biodiversity, and is the main source of protein for more than a billion people around the world. An estimated 40 million people will be employed by ocean-based industries by 2030.

As a pre-conference event for the International Conference of Tropical Sciences (TropSc 2021) and an addition to “The Future Belongs to The Tropics” webinar series, the Mahathir Science Award Foundation, the Academy of Sciences Malaysia and the International Science Council Regional Office for Asia and the Pacific joined hands to conduct a webinar with the title, “Ocean Life and Livelihoods in The Tropics”. This webinar was organized in commemoration of World Ocean Day that aims to unite ocean action worldwide, as well as inform people of the importance of safeguarding our World’s ocean.

In line with the official World Ocean Day date, the virtual webinar took place on 8 June,  Following a brief introduction of the webinar, Prof. Martin Visbeck from the UN Decade of Ocean Science for Sustainable Development headlined as the opening keynote speaker for the webinar. In his keynote address, he shared a few points on addressing the 10 Ocean Decade challenges in the ocean-climate nexus. This included action frameworks that could restore ocean biodiversity in tropical regions, building digital capacity as strategy for future marine solutions to achieve the United Nation 2030 Agenda for Sustainable Development. The message of hope he shared was that achieving the Decade outcomes would ensure the sustainable prosperity of the “ocean we want” in the future.

The webinar speaker line-up consisted of diverse expert panelists which brought together a full slate of topics that focused on several key areas, such as Climate Change, the Blue Economy, Sustainable Livelihoods, and Youth for Ocean Protection.  The panel consisted of Prof. Narnia Bohler-Muller  from the Human Sciences Research Council, South Africa, Prof. Edvin Aldrian of the Agency for Assessment and Application of Technology (BPPT), Indonesia, Ms Maria Corazon M Ebarvia from the Partnerships in Environmental Management for the Seas of East Asia (PEMSEA), the Philippines and Mr Quek Yew Aun from Reef stakes, Malaysia, alongside with moderator, Ms Cheryl Rita Kaur from Maritime Institute of Malaysia.

Prof. Edvin started by explaining the implications of climate change and global warming on ocean ecosystems in the tropical region, as well as highlighting the threats of man-made actions on marine biodiversity. Following that, Prof. Narnia shared an array of knowledge on the blue economy perspective which she regarded as an alternative development model for multiple sectors. She said that the blue economy could also be viewed within a social context as it promotes inclusive growth and sustainable development of ocean life.

Next, Mr Quek captured the audience’s attention, especially the younger generation when he said that “youths have the energy and potential”, and emphasized that the youth have the capability to become part of the solution in climate advocacy and action. The final panelist, Ms Maria, talked about the important role of  traditional knowledge. She highlighted the need to recognize the voices of indigenous communities as a holistic approach to sustain ocean and livelihoods, and support decision-making for marine resource planning and recovery.

The panel discussion continued to explore topics surrounding the ocean and livelihoods in the tropical region which included addressing challenges from a global perspective. Some of the key points raised were the vulnerability and resiliency of coastal communities in response to climate change, municipal fisheries, and aquaculture development for sustainable marine resource management. The panellists also underscored the importance of generating collective impacts at all levels by establishing an effective national ocean policy and governance for the tropical ocean. At the end of the session, Prof. Mazlan gave her closing remarks in which she mentioned that  the UN Ocean Decade could be used as an action framework consisting of transdisciplinary priority areas  relating to the ocean for the Tropics. 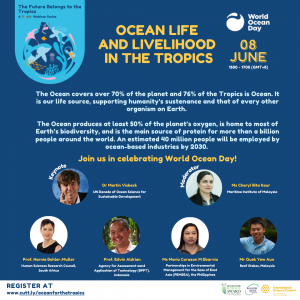