Tropical Forests Under Threat: Finding Our Way Out of the Woods

On 23 March 2021, the Mahathir Science Award Foundation (MSAF), the International Science Council, Regional Office for Asia and the Pacific (ISC-ROAP), and the Academy of Sciences Malaysia (ASM) in partnership with the Jeffrey Sachs Center on Sustainable Development at Sunway University jointly organized a webinar themed ‘Tropical Forests Under Threat: Finding Our Way Out of the Woods’ in conjunction with the International Day of Forests.

Tropical forests cover 7% of global land surface and support over 60% of terrestrial biodiversity. They store an estimated 25% of the world’s carbon and play a pivotal role in regulating the world’s climate. The extent of deforestation in the tropics is higher than the rest of the world. Forest degradation and deforestation in tropical countries is a major environmental, social, and economic problem, and will continue to be so unless action is taken.

While efforts for tropical forest recovery have centered on forest restoration, efforts to protect existing natural forests and develop sustainable funding mechanisms are arguably vital as well. In this webinar, we showcased efforts around the world that support both tropical forest protection and restoration.

The webinar commenced with welcome remarks from ISC-ROAP Director, Prof. Mazlan Othman which emphasized the purpose of the webinar and how it would tie in with the overarching theme of how the future belongs to the tropics. After the welcome remarks, the panel discussion commenced, moderated by Professor Gopalasamy Reuben Clements, a senior fellow at the Jeffrey Sachs Center on Sustainable Development at Sunway University.

Professor Reuben firstly introduced all the panellists who were based in three different continents, then he invited the first speaker Adam Gibbon, the founder of NatureBased Ventures in the UK to talk about the potential of carbon-based finance for forest protection.

Adam talked about the increased demand and interest for voluntary carbon credits, and the increased price of carbon. He mentioned that based on research, the rising price of carbon would also increase the percentage of forest land that could be protected. Local governments and private corporations can generate carbon credits through different activities that include reforestation amongst others. He also mentioned that to create a carbon project, the scale must firstly be large enough to generate a significant revenue stream and be funded at an early stage.

Next, Sri Rao from the NGO Rimba talked about a Malaysian project (Kenyir for Life) that is being financed using green finance. He mentioned that Rimba managed to convince the Terengganu State Government to create a protected area in Kenyir and have a body to manage it. To protect this area from threats such as logging in the long-term, Rimba decided to shift from the conventional grant-based funding model to revenue from green investments by the private sector. This creates a financial incentive for local government to have sustainable management of forests.

Following on from Sri Rao’s presentation, Dr James Roshetko from World Agroforestry in Indonesia talked about a sustainable agroforestry project that improved the livelihoods of smallholder farmers. The project involved training local farmers in forest and tree management and empowering them to be specialists in their own field. The farmer-to-farmer approach that the project adopted enabled farmers to lead other farmers in sustainable agroforestry management. Training in enterprise management also transformed smallholder farmers from producers per se to partners with the private sector.

After Dr Roshetko’s presentation, Esteban Brenes-Mora of the Costa Rica Wildlife Foundation continued the theme of conservation for community empowerment, in the context of Costa Rica. Esteban mentioned that Costa Rica is seen as a leader in biodiversity conservation – this originates from a series of policies that promoted increasing forest cover. This, in turn contributed to the country’s GDP. Ecotourism contributes to 13% of the GDP of Costa Rica. Esteban explained that ecotourism not only promotes reforestation but creates opportunities for the local community. An example of such a project, is a tapir conservation project that encouraged the conversion of cattle farming land to tapir ecotourism project area.

Last but not least, Rudi Putra of the Leuser Conservation Forum in Indonesia presented his reforestation work in the Leuser Ecosystem in Aceh. Interestingly, Rudi showed a map of how most biodiversity hotspots did not fall under national park areas and instead were located in the remaining lowland forest area known as the Leuser Ecosystem. This area is home to many endangered species such as the Sumatran Rhino and Sumatran tiger. The main activity of Rudi’s organization is to prevent forest loss by cutting down illegal palm oil trees and replanting trees through natural regeneration. This proved to be a simple yet effective way to increase forest cover and natural habitat for wildlife.

After all the presentations, Prof. Reuben opened the panel discussion by asking Adam what role the private sector can play in forest restoration. Adam said that firstly the private sector needs to stop being part of the problem by taking responsibility of activities that may promote forest degradation. He also mentioned that investors and land managers should play to their strengths in terms of the capital and land they could provide for carbon projects, and we should encourage young talent, particularly in the technology industry should work for forest restoration. Lastly, he said that the speed and energy of the private sector should be harnessed in view of the climate emergency. 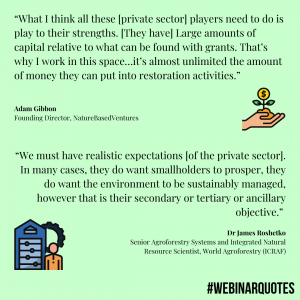 Prof. Reuben then asked the panellists about the role of NGOs. Sri Rao said that NGOs could bridge the gap between government and private sectors, and provide an understanding of what happens on the ground without any profit-making incentives. He also mentioned that co-management with the government is the way forward. Dr Roshetko added that we must have realistic expectations of the private sector, as forest protection would always be a secondary motive after profit-making. However, the private sector can be made aware of how ethical/greener decisions can positively impact the profit they make. 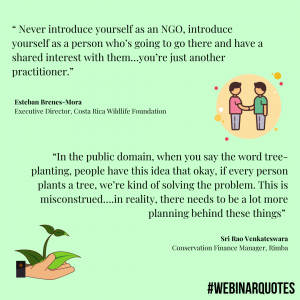 Esteban said that historically NGOs have been assisting and not collaborating. Therefore, NGOs should strive to be seen as equitable partners who have shared interests with the communities and governments. Rudi then talked about how governments should facilitate and promote forest protection through their policies. Prof. Reuben then asked the panellists on the role of researchers and research institutions. Dr Roshetko said that researchers are accustomed to multistakeholder engagements and have technical expertise. Esteban added that what is needed as output from academia is the implementation of real-world solutions. 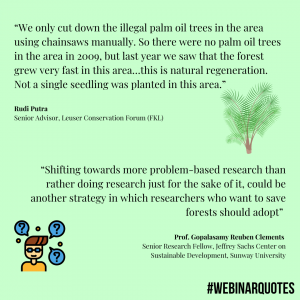 The last question from Prof. Reuben to the panellists was whether tree-planting is enough to preserve forests. Dr Roshetko said that tree-planting is very important, and it is equally important to get the right mix of species in degraded lands when planting. Adam added that between tree-planting and protecting existing forests, protecting existing forests is a more efficient method from a climate perspective, as it is cheaper and tree-planting tends to take a long time. Esteban said that when thinking of the right approach to forest restoration and protection, we need to think of methods that will empower local communities who live near forest areas to lead these efforts. The webinar ended with Sri Rao giving an important message on communication. He explained that the term “tree-planting” is misconstrued in the public domain as aside from the actual planting of trees, there is actually a lot of planning that needs to go behind an effective tree-planting programme. Therefore, there should be more public awareness on what is meant by tree-planting.

Overall, the webinar was a success in bringing people from 18 countries together in the interest of tropical forests. In the feedback survey, webinar participants indicated that they liked the global approach of the webinar which enabled them to have a clearer view of forest restoration activities and challenges worldwide. 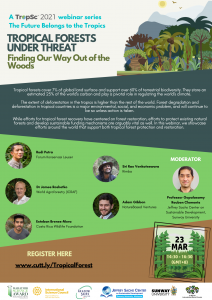 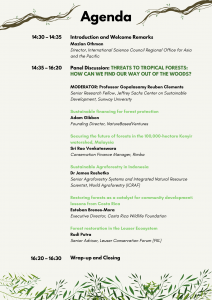