World Cities Day: The Soul of the City

The Mahathir Science Award Foundation (MSAF), the International Science Council, Regional Office for Asia and the Pacific (ISC-ROAP), and the Academy of Sciences Malaysia (ASM) jointly organized a webinar themed ‘The Soul of the City’ on 4 November 2020 in conjunction with World Cities Day.

By 2050, 2.5 billion people will be added to the world’s urban population, with nearly 90% of this increase taking place in tropical Asia and Africa. Cities in the Tropics will, therefore, drive future global discourse on urbanisation. The webinar explored the diverse elements that make up the ‘’soul’’ of cities in the tropics.

The webinar commenced with welcome remarks from ISC-ROAP Director, Prof. Mazlan Othman and opening remarks from the Regional Representative for Asia and the Pacific of UN-Habitat, Mr Atsushi Koresawa. To set the scene of the webinar, Dr Karima Kourtit of the Open University of the Netherlands delivered her keynote address on “City Love: The Body and Soul of the City”. During her speech, Dr Kourtit addressed her academic research on the decisive factors that contribute to city love. Using an ‘urban piazza’ model to visualize and make these factors measurable, Dr Kourtit demonstrated that ‘soul’ factors such as history, cultural identity and social capital showed a stronger quantitative impact on city love than ‘body’ factors such as the built environment and infrastructure.

Following the keynote address, there was a panel discussion which further investigated the queston of ‘what makes up the soul of tropical cities?’ The panel discussion was skillfully moderated by Mustapha Zulkarnain, a Malaysian architect and resilient city consultant. The panel consisted of experts from different fields and geographical locations, resulting in an interesting dialogue with diverse perspectives. The panel discussion was initiated by Eddin Khoo of Pusaka, a cultural organisation that works intimately with the leading custodians of ritual and traditional performing arts in Malaysia and the region. Eddin talked about the unique role of culture in tropical cities. He also touched on the effect of colonialism on tropical city development, and the ability of culture in the tropics to thrive in different contexts.

Next, Gaétan Siew, a leading visionary in architecture and urbanism from Mauritius talked about his perspective on the soul of cities in the tropics. He emphasized the ‘joyful chaos’ of tropical cities and the energy that tropical cities emanate as a result of the large youth population and the constant state of survival. Following Gaetan’s sharing, Anáclaudia Rossbach the Regional Manager for Latin America and the Caribbean of Cities Alliance talked about the “invisible souls’’ of cities in the global south. She highlighted that division in cities in the tropics between the rich and poor contribute to the broken soul of cities. She also emphasized that the voices of the invisible inhabitants of cities (e.g. slumdwellers, vulnerable people etc.) must be heard to fix the soul of the city.

The last panellist to speak was Dr. Woralun Boonyasurat of Chiang Mai University. Dr. Woralun explained how Chiang Mai, a city in Thailand, achieved recognition of its folk art under the UNESCO Creative Cities Network.  She shared how pride and appreciation for local heritage could be inculcated in local youths through special programmes that would then receive worldwide recognition for their merit. After Dr. Woralun’s talk, all the panellists had a meaningful exchange and answered audience questions. Overall, the webinar was well attended with over 150 registrants from 12 different countries (i.e. Malaysia, Indonesia, the Philippines, Japan, Thailand, USA, UK, France, Kazakhstan, Brunei, Australia and the Netherlands). Feedback from webinar participants indicated that they enjoyed the unique alternative view of World Cities Day that the webinar provided. 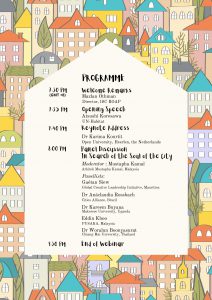 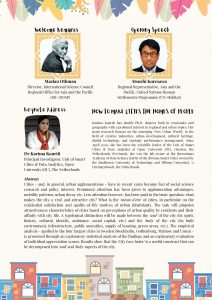