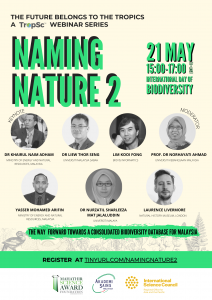 In 2017, a Naming Nature workshop gathered some of Malaysia’s most experienced taxonomists with a group of young, enthusiastic researchers. They clamoured for a system to better handle identification, digitisation and communication within the community. However, these issues still remain unresolved.

Therefore, a webinar with the same title was held to invite further discussions on crafting a future path to address these problems for Malaysia, including taxonomic challenges, specimen digitisation and data stewardship.

Naming Nature 2 was held on 21 May 2021 via Zoom in conjunction with the International Day of Biodiversity. The webinar was jointly organised by the Academy of Sciences Malaysia (ASM), Mahathir Science Award Foundation (MSAF) and the International Science Council (ISC). 280 people from 12 countries (Australia, Bangladesh, Denmark, France, Indonesia, Malaysia, Netherlands, Philippines, Singapore, Spain, UK, USA) had registered for the webinar.

Dr Khairul Naim Adham from the Ministry of Energy and Natural Resources was in attendance as a Keynote Speaker to elaborate on the Ministry’s National Biodiversity Agenda, which works towards a consolidated biodiversity database in Malaysia.

Malaysia has been identified as one of the top twelve megadiverse countries in the world. Alongside Australia, Brazil, Ecuador, and others. There are various efforts that are carried out to preserve and conserve Malaysia’s biodiversity, but not without its own host of issues and challenges. Among the issues mentioned by Dr Khairul were: aligning federal-state legislative power in conservation efforts, balancing conservation endeavours with the needs of economic development, and of course, establishing a biodiversity database.

According to Dr Khairul, there is no dearth of data about Malaysia’s biodiversity, with more than 135 data owners, 72 of which are research institutions and 63 public & private universities. While being beneficial, the large number of data from various sources brings with it challenges in having multiple data formats and communication protocols, which translates to difficulties in data access and data cohesion. Some instances of data sharing barriers stems from practicality; psychological and behavioural aspects; data description; as well as inadequacy in strategy and/or resources.

The National Policy on Biological Diversity 2016-2025 works in tandem with several global biodiversity targets to conserve biological diversity, promote its sustainable use, and ensure fair and equitable sharing of the benefits arising from the utilisation of biological resources. The Agenda’s central message is that biodiversity is our shared heritage, and it is our shared responsibility. To bring about positive outcomes, the Agenda consists of five goals, under which are placed its targets and the actions with which the targets can be achieved.

Dr Khairul emphasised several points within the Agenda that related to the webinar’s objective. One such point was Action 16.2: “Establish comprehensive Database and Monitoring Programmes” under the target of Improving scientific knowledge of Goal Five (Improve the Capacity, Knowledge and Skills of all Stakeholders). The action states that a continued effort will be made to document the country’s flora and fauna through the enhancement of taxonomic work. the Agenda also aims to strengthen the national clearing-house mechanism (CHM) while ensuring that information can be accessed and shared by scientists, resource managers, and other stakeholders. Plus, it aims to establish a network of depositories of specimens and records.

Under the same Goal and Target, the Agenda also aims to improve the interface and communication between science and policy by synthesising and conveying scientific findings in a timely and easily understood manner to various stakeholders to ensure policy formulation is evidence-based. Also, effective communication channels are to be set up between the scientific community and policy makers, all levels of government administration and the general public. These were some of the points on the Agenda that relates to the webinar that was highlighted by Dr Khairul through his presentation.

Dr Liew Thor Seng from UMS provided an overview into taxonomy, the challenges in the field of taxonomy, as well as embracing information and internet technologies to overcome said barriers.

Taxonomy is the branch of science concerned with classification, especially of organisms. A general overview of the process entails collecting/observing specimens, followed by checking secondary taxonomy references such as popular field guides. Then, the species is recognised and identified.

Some challenges mentioned by Dr Liew include:

Dr Liew presented on how technology can be embraced to overcome these challenges. Moving away from traditional ways of keeping taxonomic records, Dr Liew mentioned Global Biodiversity Information Facility (GBIF) and the Biodiversity Heritage Library as examples of online repositories for taxonomic data. These online repositories are accessible, scalable and most importantly they are integrated.

The Digitisation Experience at the Natural History Museum of London

Lim Kooi Fong elaborated on the digitisation effort to bring back Malaysian natural heritage that was held at the National History Museum (NHM) from 1 July 2017 to 30 June 2018. The project was awarded to Ecotourism and Environment Conservation Malaysia (ECOMY).

A total of 21,037 digital images were taken, including 5,010 Alfred Wallace-related specimens. Kooi Fong then explained the process of digitisation, comprising a setup of the imaging and digitising equipment, preparing the specimen for imaging, followed by the imaging process. Through this explanation, Kooi Fong recommended a general workflow for anyone that intends to digitise their collection.

The Malaysia Biodiversity Information System (MyBIS) was set up as a part of Malaysia’s commitments under the United Nations Convention on Biological Diversity (CBD). MyBIS is a platform to centralise, analyse and provide effective information to the National Policy on Biodiversity (NPBD) 2016-2025 and the National Report to Convention on Biological Diversity (CBD).

FAIR is an abbreviation for Findable, Accessible, Interoperable and Reusable, meaning that data should be “as open as possible and closed as necessary”. There is an urgent need to collect, preserve and share FAIR data on biodiversity (e.g. ecological data, species data, genetic data) for evidence-based analysis of biodiversity data by different stakeholders including researchers and policymakers.

The Project highlighted by Dr Nurzatil is the first phase of FAIR Data Stewardship Guidelines for Reproducibility in Biodiversity Research. This one-year project implemented by Universiti Malaya was funded by International Science Council (ISC) and the Academy of Sciences Malaysia.

The project identifies issues with biodiversity research such as lack of research reproducibility thanks to poorly managed, archived, curated, integrated, shared and preserved data. To address the issue of curation, data stewardship support is strengthened for the biodiversity data journey and throughout the life cycle.

The project aims to develop hierarchies and roles by understanding and streamlining the process flow of data journey, as well as mapping out roles of data stewardship in the data life cycle. A landscape assessment will be developed to map out data requirements that meet researchers’ needs and identify data that they are producing in respective research disciplines, as well as to create awareness and evaluate data stewardship readiness. Besides that, a set of biodiversity data stewardship guidelines will also be established for researchers, data stewards , and IT technologists.

This project is only the first phase of a three-part open science journey, which will be followed by the digitisation process and connect & share phase.

According to GBIF, a taxonomic backbone is a single, synthetic management classification with the goal of covering all names GBIF is dealing with. It allows GBIF to integrate name based information from different resources, no matter if these are occurrence datasets, species pages, names from nomenclators or external sources like EOL, Genbank or IUCN.

This backbone allows taxonomic search, browse and reporting operations across all those resources in a consistent way and to provide means to crosswalk names from one source to another.

Several key considerations need to be taken into account to build a taxonomic backbone. It should consider stakeholder/user requirements, technical requirements, as well as sustainability of the system and funding sources.

Some examples of taxonomic databases were presented, such as the National Biodiversity Network (NBN) in the UK, a collaborative partnership created to exchange biodiversity information. Australia’s Atlas of Living Australia is a free and open source national biodiversity database. REFLORA from Brazil is a national database with focused government-supported international effort on creating a national virtual herbarium and flora. GBIF is actively used in Colombia as a highly coordinated national effort across taxa, contributed to by many participating institutes and serves as a main point of reference when drafting new national legislations.