On 11 December 2020, the Mahathir Science Award Foundation (MSAF), the International Science Council, Regional Office for Asia and the Pacific (ISC-ROAP), and the Academy of Sciences Malaysia (ASM) jointly organized a webinar themed ‘Mountains and Life’ in conjunction with International Mountain Day.

The webinar commenced with welcome remarks from ISC-ROAP Director, Prof. Mazlan Othman which emphasized the purpose of the webinar and how it would tie in with the overarching theme of how the future belongs to the tropics. After the welcome remarks, Dr Sam Kanyamibwa, Executive Director of the Albertine Rift Conservation Society talked about the role of mountains in bringing people together and providing sustenance to the communities that live both on and off the mountains.

After Dr. Kanyamibwa’s speech, the webinar continued with a multidisciplinary panel discussion. The session was skillfully moderated by environmental writer and co-founder of the Malaysian environmental news portal Macaranga – Siew Lyn Wong. The panel session had an organic flow of discussions despite the different topics covered by each of the speakers.

The panel session began with an introduction on the geology of mountains by Prof. Felix Tongkul of Universiti Malaysia Sabah. He explained how mountains are formed by extreme forces below the surface of the Earth and why mountains are important for the planet. One of the reasons he mentioned was that mountains were sites of biodiversity. This point nicely led to the next presentation by Prof. Menno Schilthuizen, an evolutionary biologist at the Naturalis Biodiversity Centre in the Netherlands. Prof. Menno spoke about his own study of the tropical biodiversity found on Mount Kinabalu. He highlighted how the species found on mountains are uniquely evolved to the mountain area due to the geographic isolation.

After the first two presentations on geology and biodiversity. Siew Lyn, the moderator posed a question to the first two speakers. She asked them whether the evolution of mountains and the species found on mountains differed in tropical climates. Prof. Felix said that geological evolution of mountains mainly depends on the types of rocks the mountains are formed from, and that differs from mountain to mountain. Meanwhile, Prof. Menno said that the increased solar energy from a tropical climate may increase biological productivity and therefore the amount of specialization a species can undergo.

The discussion then moved on to the “people’’ aspect of life on the mountains. Mirella Gallardo of Instituto de Montana in Peru spoke about a mountain Ecosystems-based Adaptation (EbA) project she leads that explores how ancestral technologies, such as ancient dams can help mountain communities deal with the effects of climate change. Following on from Mirella’s talk, Andini RIsfandini and Dr Sunardi of Universitas Merdeka Malang in Indonesia presented on the effect of tourism on communities and nature in Bromo-Tengger-Semeru National Park, a mountainous national park in East Java. They explained how mountains like Mt.Bromo in Indonesia had huge cultural significance to the communities that lived there. They also presented the results of their analysis of the effects of tourism on the park which showed that tourism has largely positive sociocultural impact but negative impact on nature.

Siew Lyn then asked Mirella and her colleague Jaymee whether the communities they worked with were aware of the value of ancient technologies that exist in Peru. Mirella said that many of the people living in the communities were not aware of the value of these technologies, and Jaymee added that despite this, communities were open to learning about the technologies and are highly adaptable owing to their experience of life in the mountains. In addition, Andini said that the mountain communities in Indonesia still maintain cultural practices from the 14th century but the introduction of new technologies that enhance tourism in the area may be beneficial too.

The panel discussion was then opened to all the speakers. The questions posed included “how do we create a respectful relationship between humans and nature in the mountains?” and “what kind of policies are needed to mitigate the effects of climate change on mountains?”. The questions stimulated discussion on raising awareness on the value of mountains and mountain communities as well as policies to prevent deforestation on mountain slopes.

The webinar then concluded on an enlightening note where all the speakers conveyed their own message on mountains to the public. Prof Menno said that the spirituality of mountains always touches him whilst Dr Sunardi and Andini conveyed their hopes for the preservation of mountain ecosystems and the people who live side by side with mountains. Mirella and Jaymee said that it is important that people who live off mountains appreciate their importance and that all studies on mountains should inform policy. Last but not least, Prof Felix said that mountains and mountain communities should be given due respect and wished the audience a happy International Mountain Day.

Overall, the webinar was a success in bringing people from 14 countries together in the interest of mountains in the tropics. Due to the multidisciplinary nature of the webinar, all participants indicated that they had come out from the webinar having learnt something new. 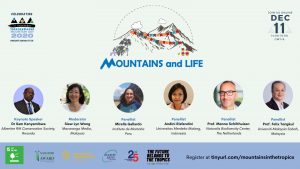