Coffee: Black Gold of the Tropics

The Mahathir Science Award Foundation (MSAF), the International Science Council, Regional Office for Asia and the Pacific (ISC-ROAP), and the Academy of Sciences Malaysia (ASM) jointly organized a webinar themed ‘The Soul of the City’ in conjunction with World Cities Day on 1 October 2020.

The purpose of the webinar was to celebrate the richness that coffee, a major trade commodity in the tropics, brings to our lives whilst recognising the plight of coffee growers in the region. Unlike previous webinars which were recorded live from ASM, this webinar was aptly recorded live from Mukha Café. In addition to the 76 online registrants from 14 countries (eg. Malaysia, Sweden, Australia, Japan, Netherlands), there was also a small live audience at Mukha Café.

To set the scene of our coffee-themed webinar, the first speaker, Prof. Jonathan Morris, a historian from the University of Hertfordshire took participants on a journey through the history of coffee culture. He gave an interesting overview of coffee’s evolution from its origins in Ethiopia to the establishment of coffee houses in Europe to the commercialization of coffee. Prof. Morris also described the rise of Asia as a major coffee producer, and consumer in the current age.

Next, Edgard Bressani of Capricornio Coffees in Brazil gave an enlightening presentation on the impacts of climate change on coffee. He mentioned that there will be a shift in coffee growing to higher latitudes due to climate change. As coffee can only be grown under specific climates (not too much rain, not too much sunlight), climate change is a challenge that needs to be overcome through methods such as collecting climatic data, conservation and research into resistant coffee variety.

Following Edgard’s session, Trista Chua of Olam International gave a talk on the economics of coffee. All the major exporters of coffee are in the tropics. As a traded commodity, the price of coffee varies due to several factors. Trista explained the factors that could drive the price of coffee in the market. This included climatic factors, geopolitical factors, speculator effect, enterprise trading (buying activity of large coffee roasting companies) and the global demand outlook.

During the interlude between the Trista’s talk and the panel discussion, a video on a local coffee seller was played. The video featured Ariff Saharudin who owned a unique ‘mobile café’. In the video, Ariff revealed what inspired him to sell coffee out of his car and why his ‘mobile café’ concept attracts customers.

The webinar was concluded by an insightful panel discussion which was titled “No Time for Bad Coffee”. The discussion was moderated by Lutfi Hakim of Tukang Cherita and featured individuals from different facets of the coffee industry. The discussants were Eddy Dailami of Pinto Coffee, Catherine Goh of Santan, Edward Choo of Toothless Coffee and of Pagi Coffee Co. The panellists each had their own unique take when asked the open question “how can we make coffee better?”. The responses to this question included empowering coffee farmers, promoting local beans, mass support from businesses for environmentally friendly packaging, and having a friendly barista. All the panel discussants were present at Mukha Café allowing for free-flowing discussions. Overall, this new model of a ‘hybrid’ webinar allowed for viewers, both physical and virtual. to experience the webinar in a new light and broaden their horizons on the subject of coffee. 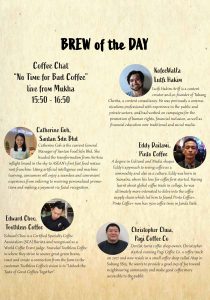